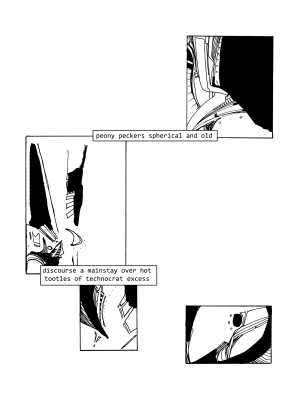 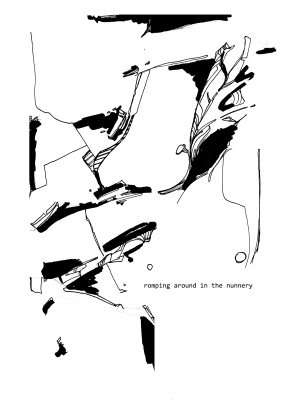 Found Forest Floor is a graphic novel which pairs abstract illustration and poetry to create a non-linear narrative. It is illustrated by Gareth A Hopkins and written by Erik Blagsvedt. It’s currently available via print-on-demand here: https://www.c4reatespace.com/734819

It’s also available signed, with a page of original art from the book, at grthink.bigcartel.com

In 2016 David Quiles Guillo approached Gareth A Hopkins and Erik Blagsvedt to collaborate on an abstract graphic novel for his Abstract Editions publishing imprint.

By design, Hopkins created 250 pages of abstract illustrations through a combination of traditional and digital methods which were then arranged in such a way that they suggested a narrative. These were used as inspiration by Blagsvedt to create blocks of poetry which were then edited and inserted into the artwork by Hopkins.

The result of this process is ‘Found Forest Floor’.

On one hand, the reader will get out of Found Forest Floor what they’ve taken in with them. Their individual interpretation of the images and text, and the narrative they build from it, is the most important interpretation, and the one that the authors are keen to encourage.

On the other hand, the artwork is created from abstractions of specific locations and people from Hopkins’ life – his family, the park in Central London where the majority of the drawing was completed, beaches and forests in West Wales, and the rural roads of South-East England to name a few. From those beginnings, the images have been shaped and arranged by circumstance, instinct and predilection into the forms presented in the book. Direct, but broad, influences on the imagery and its presentation are science fiction, surrealism, comics, text books and music.

For his part, Blagsvedt used cut-up and diastic techniques to create batches of words that he liked, which were then compiled into blocks of text. Using this technique, 200 blocks of text were written and then edited down to the 50 pages submitted to the project. Working this way allows a distance to grow between Blagsvedt and his writing, whilst his voice remains – in his words “I don’t remember writing them but they seem to sound like something I would write”. Around half of the text submitted was added to the illustrations by Hopkins.